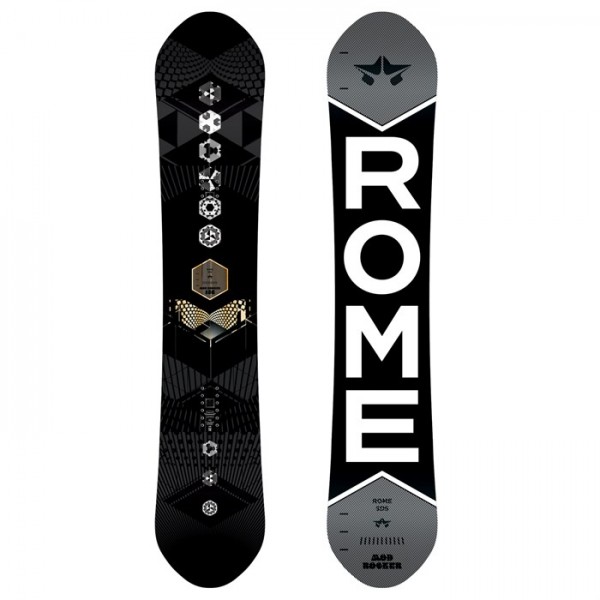 Beschreibung Bewertungen 0
Beschreibung
Don't let your riding get pigeon-holed by something as simple as your snowboard. Designed for... mehr
Menü schließen
Produktinformationen "Rome MOD Rocker 156"

Don't let your riding get pigeon-holed by something as simple as your snowboard. Designed for the likes of Thomas Delfino, backcountry freestyler extraordinaire, the Rome Mod Rocker Snowboard is back again for yet another year of all-mountain assault. This rockered tip and tail shape with a flat center section offers all mountain capabilities and a snappy ride, so you can turn all corners of the mountain into your personal playground. Backcountry booters, steep pow chutes -- wherever you may find yourself, drop in with confidence on the Mod Rocker.

FreePop Rocker –  Flat camber in the mid-section of the boards meets up with rocker in the nose and tail to create a super versatile feel and response. The flat camber zone gives stability and directional response, while the rockered nose and tail give super press-a-bility and playfulness in all types of snow. Great for riders who like to balance creative trick selection with solid all-mountain freestyle performance.

QuickRip Technology –  The goal with QuickRip Sidecut is to create a board that does two things: stay nimble and maneuverable at slow speeds, and maintain power and precision at high speed. This is achieved by integrating two off-set sidecuts that create one sidecut zone in the nose, one between the feet, and one in the tail. Where the center section meets the other two sections, Rome has created Mid-Board Contact Points.

TurboRods | Carbon Double Barrel –  Two TurboRods in the tail add pop in two main directions - inline with the board for bigger ollies, and torsionally when the board twists for more power off edge. More kick in the tail of the board.

SinterCarbon Base –  Carbon additives help reduce friction and make the base super fast. A highly porous structure soaks up the wax.